With most kids having reported to school earlier this month, it is time to reflect on what was an exciting though short holiday. Exciting because I and a few children (the offspring of a few close friends) finally got to do something I’d dreamt of doing for a long time – we held a Holiday Science Camp! Yaaay! I strongly believe that the reason we remain one of the poorest countries on earth is simply because we don’t “do” science & technology well. And the reason for this is we don’t encourage children to get grounded in science from an early age at home. Neither do we do much to stimulate their creativity, natural inquisitiveness and hunger for knowledge – something that would serve them well later in life  irrespective of their chosen career paths. Instead we rely on schools to do all the education and that is a sure recipe for disaster. I have very strong opinions on the state of the education system but I don’t think it is to blame wholly for this state of affairs. More on this in a series of posts later.

For now, let me share what we did during the said camp. The participants were about 11 6-12 year old children from my church cell group and the camp lasted 3 days. The idea was simple – get the kids to do a few simple experiments. Initially, I’d planned to have each day dedicated to each of the major science branches i.e. Physics, Chemistry and Biology. On further reflection however, I realized it would probably not be a great idea to show kids the result of mixing vinegar and baking soda… So we scrapped the Chemistry track 🙂

On the first day, we started off with an introduction to two of the most important things that any budding scientist should know:

Of course science is all about doing and not just listening and so off they all went to do their very first assignment: measure as many random things as they could find within 10 minutes and record their findings in their notebooks.

It was quite interesting to note how easy it is get children to understand what units of measurement are and why accurate measurements are so important in so many ways. What a shame that so many only get to learn such in S. 1!

After this,  we had a interactive session with the kids listing what everyday things fascinate them most and would thus love to get an in-depth understanding of (i.e how they work). As expected, airplanes and cars featured a lot on the list. And so did electric guitars! The plan was to consolidate the things into one list and use it as some sort of ‘syllabus’ guide over the next few days.

Once we were done, we embarked on the main day’s activities – simple experiments involving electricity. First up was the light-bulb moment for the kids: Connecting a bulb to a couple of dry cells. Seeing the kids faces light up as soon as they managed to get their LED bulbs to light up, I realized how absurd it was that modern day kids living in urban areas (irrespective of level of affluence) don’t get the opportunity to do these simple experiments. Yet they were a staple of life for some of us that grew up in pretty rural settings.

Finally, we got introduced to the principle of electro-magnetism: Using the same dry cells, the kids created their first ever electromagnets by wrapping insulated copper wire around some 6″ nails and proceeded to see how many paper clips they could pick up.

All in all, a fabulous day. I must say it got me feeling very appreciative towards the teachers that handle pre-primary and primary children. How abundantly patient and impervious to irritation they have to be… 🙂

Based on how Day 1 had played out, we decided it was a little bit too ambitious to have sessions the whole day and so we resorted to a half-day programme for the subsequent days. Day 2 was devoted to learning the principles of jet engines and rockets. Incidentally, it turns out that videos are a very effective way of grabbing children’s attention and so we had the session sprinkled with short videos. The most captivating ones were Space Shuttle launches and landings – all freely available on YouTube. Parents reading this – please get onto YouTube and get this kind of material for your kids. There are thousands of videos that are highly educational and yet fun. It was fun seeing the kids joining in the countdown to blast-off of their own accord and subsequently watching the launches and first stage rockets detaching and dropping off with wide eyes.

To illustrate the principles involved, we used balloons. And to show that escaping air from a balloon can actually be put to good use (as opposed to simply propelling the balloon along a chaotic trajectory), we built a balloon powered car. Toy car I hasten to add – with bottle cap wheels and cardboard box body…

Finally, we built our very own rockets by wrapping matches (the active heads) in tin foil and using a cigarette lighter to set them off. Of course, the kids competed to see whose would travel farthest and there was a very clear winner.

On the last day, we revisited our list of stuff the kids wanted to understand and went through the items – one by one. We sadly didn’t do everything justice with practical demonstrations however given the limited amount of time we had.

We then switched to Biology and had a brief discussion on the composition of organisms. Then we embarked on the day’s main activity – using a microscope. The microscope we were using had been borrowed from a fine gentleman called James Wire whose blog you really should be following. Thanks James once again – you made these kids day. The challenge was to observe certain slides under the microscope and then try to draw what they had seen. 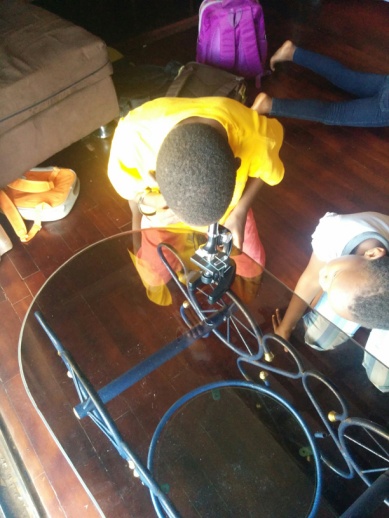 Before the exercise however, I had asked them all what they want to look at under the scope and the answer was unanimous – BLOOD! 🙂 Sadly, I disappointed them by gently pointing out that pricking people for blood is best done in a medical facility by qualified people. It was very interesting (and amusing) to see the influence of visits to health facilities by these young ones…

I should point out here that in my 4 years of O-Level, I only got to use a microscope once in the Biology Lab. Not twice or thrice but just once! I guess I’d have had a lot more time with the tool if I’d elected to do Biology at A-Level but I still think even O-Level students should be getting a lot more hands-on time with such instruments.

And that was it! No camp is complete however without a Prize Giving ceremony and so was ours. We had two prizes to give out: Most Disciplined Participant and Best Overall Participant. Luckily enough, one of the parents had arrived to pick her children and played the Chief Guest role to perfection.

The prizes we gave out were a couple of children’s science texts (My First Book of Science) from Aristoc. May I suggest – at this point – that if you have a child capable of reading (6+ years) and that same child does not OWN an encyclopedia yet, then stop reading this and head to Aristoc or Bookpoint and buy him or her ONE immediately! Seriously. And don’t stop there – make it a point to keep buying them books on a regular basis covering a wide range of subjects/topics. More on this in subsequent blog posts.

Obviously, we’ll be doing this again. After our experience this time round, there’s simply no way we can ‘dodge’. Next holiday, the plan is to do a substantially more ambitious project e.g. build a go-kart or dabble in some robotics. Then, during the Christmas holiday, we plan to introduce some of the children to computer programming. Note that all this will basically be completely child oriented with the sole aim of firing up their creativity and getting them to understand that the wonders of the modern world are not all, er, unfathomable rocket science. What impact will this eventually have? I cannot say for sure. But we can only hope that it will be positive.

I am also seriously considering expanding this to include a lot more children. It would be fantastic to see a movement get born that seeks to get children to stop spending all their time watching cartoons and actually discovering how the world works (both via reading and also practically). So in addition to including more children in our programme, I’d love to start campaigning for other parents to replicate this. And it doesn’t have to just be science stuff – how about getting children to learn how to write fiction? Or make cartoons (instead of just watching them for hours on end)? However, the logistics of such a move would have to be carefully assessed and planned for and so this won’t be immediately possible. That said, I was very encouraged when I told people on the 256io group (Ugandan techies) about this initiative and a couple of them volunteered to join and help next time round.